Access to medical care is of primary concern for locals. Young children experience severe dehydration and sometimes death following bacterial and protozoa infections. Women are at risk due to complications of childbirth that are difficult to treat locally. Transport of patients is difficult due to the terrain, while paying for a doctor to be present during childbirth is expensive, and often doctors are unavailable. As a result, many women choose to move to Kathmandu for their pregnancies, but few can afford to remain in the city for long.

Access to education is of concern as well. Because villagers have a low level of education and limited or no English language skills, they find it difficult to gain employment in tourism and other industries. Karma recalls being taken advantage of by tourism companies because of his lack of understanding of the law, and his inability to speak English. As a porter, he sometimes worked only for tips, which often never came. Because he did not speak English, he could not communicate with tourists who thought their money was going toward Karma’s wage rather than into a middle-man’s pocket.

Karma believes that training directed toward the tourism industry would help villagers immensely. English language training, wilderness first aid courses, courses in natural and cultural history, sustainable tourism classes, guide training, business classes, and computer classes are courses Karma identified as being important to his own success. He hopes that through tourism, funding might be available to send someone from his village to school to become a skilled medical practitioner. 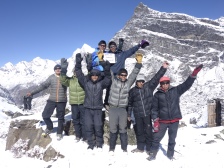 Welcome ceremony for tourists in Sibuje

Kami and his son in Sibuje 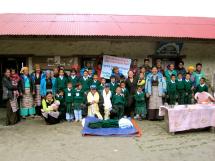 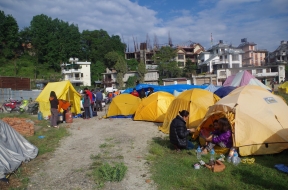 Kima Sherpa and friend in Sibuje

Thanks to our sponors